This week’s energy seminar was given by Dr Athanasios Angeloudis of the University of Edinburgh. The talk discussed a variety of prospective tidal schemes in the UK including the Swansea Bay and Cardiff tidal lagoons and the significantly more ambitious Severn Barrage designs. In this blog post he covers the potential for tidal energy and the impact it could have on the UK.

Tides have been driving tidal mills for centuries, with the earliest traces in the British Isles going back to the Roman times. In recent times, tides are examined for their capacity to deliver a large-scale electricity supply. Tidal energy features the advantage of being a renewable source that comes with complete predictability as a result of the tide generating forces attributed to the coupled Earth-Moon-Sun system and other celestial bodies.

In coastal regions offering amplifying geographical features in the form of pronounced tidal stream currents and a high tidal range there are opportunities to tap into substantial marine energy resources. The UK in particular has scope to harness a significant proportion of the national electricity needs in a sustainable manner by exploiting the tidal dynamic features attributed to the UK coastline morphology.

For several decades, there have been multiple efforts to harness tidal range energy in the UK. Most of the focus has been directed at the Bristol Channel where the second highest tidal range in the world is hosted within the Severn Estuary. As an example, a detailed scheme for a Severn Barrage was expected to capture beyond 5% of the UK’s energy and thus vastly contribute to low-carbon economy targets. In addition, such tidal range options together with tidal stream arrays can complement renewable energy options that exhibit intermittency. Following construction, the designs entail minimal operation and maintenance costs and are characterised by expected project lifetime that exceeds a century.

Ambitious barrage designs have been dismissed on the grounds of the potential environmental impact incurred to the marine ecosystems and the unique coastal processes developed in these regions. Over the last five years, environmentally-conservative technical solutions have been proposed in the form of smaller tidal lagoons that could be distributed in key sites along the west coast of the UK. Notable examples that have recently been in the spotlight are the Swansea Bay Tidal Lagoon by Tidal Lagoon Power and the Wyre Barrage by New Energy Wyre and SIMEC Atlantis. Even though these proposals have so far been received more favourably than preceding designs, the UK Government and environmental regulators stress that these technologies need to demonstrate their competitiveness relative to other mature renewable energy options and affirm their feasibility for a sustainable environmental integration.

In order to resolve the challenges faced by the burgeoning tidal energy industry, specialised engineering tools must be developed. In the case of the tidal lagoons and barrages, multi-scale models need to capture both the far-field effects of the infrastructure multiple kilometres away from the sites and the hydrodynamics closer to turbines and sluice gates. Such numerical models are to be used in environmental impact assessments and support the decisions of environmental agencies and regulators.

In particular, it becomes essential for the models to further be coupled with algorithms that simulate how tidal power plants would be operated by the developers. The latter becomes crucial if the feedback of operation scheduling strategies on the hydro-environment is to be accurately quantified. As part of research funded by the Natural Environment Research Council, computational models are developed to assess how a range of design options may influence flow conditions. Outcomes of this research aim to pave the way towards a superior performance of prospective designs, while also identifying outstanding hydro-environmental challenges that are often site-specific.

Research findings indicate how larger schemes can change the way tidal waves propagate and in turn influence flow patterns with implications extending to the magnitude and phase of the tidal constituents developed in nearby locations. These interactions can be discerned through regional coastal models (as in Figure 1) and in turn inform further optimisation studies relating to long-term power plant operation.

Beyond the identification of environmental impacts, recent findings on the temporal optimisation of the power plant accentuate the unique opportunity of tidal range energy to control hydraulic structures and achieve operation objectives. This can commence from the classical incentive of maximising energy from a finite number of turbines. Recent findings on the other hand demonstrate how the control of hydraulic structures could be fine-tuned to aim for the delivery of energy according to the transient demand of the electricity system. Several challenges emerge on that front due to the lack of synchronisation amongst tidal signals and the daily energy demand. Nevertheless, adaptive operation strategies demonstrate that over time tidal power plants can be regulated to increase the fraction of tidal power offered during high demand periods potentially strengthening the security of the electricity grid. This becomes more apparent as a more systemic approach is adopted as designs are considered at sites of complementary tidal phase characteristics.

Addressing the tidal range energy uncertainties presents a formidable multi-disciplinary engineering problem that can escalate computationally rapidly as the breadth of the influential factors is increasingly accommodated. However, recent advances in High-Performance Computing, process-based modelling and optimisation could render current and future tidal range energy an invaluable asset within the UK’s infrastructure not only as energy generators, but also as multi-use platforms for transport, aquaculture and coastal protection mechanisms. 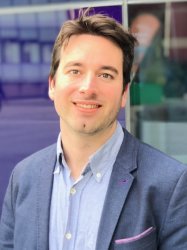 Dr Athanasios Angeloudis is Lecturer in Water Engineering at the Institute for Infrastructure and the Environment at the University of Edinburgh. He is also an Industrial Innovation Research Fellow of the Natural Environment Research Council (NERC).

Prior to these roles, he held postdoctoral positions within the Department of Earth Science and Engineering at Imperial College London and the Hydro-environmental Research Centre of Cardiff University. Both of these focused on marine energy and were funded by the Engineering and Physical Sciences Research Council (EPSRC) and the European Regional Development Fund (ERDF) respectively.

He holds a PhD in water engineering and an MEng degree from Cardiff University’s School of Engineering. His engineering and research expertise is on fluid mechanics, tidal energy, water quality, computational methods and coastal engineering.